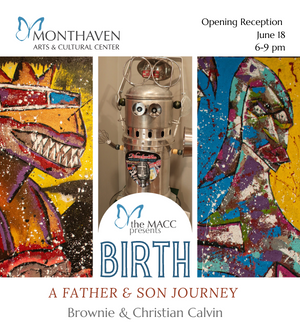 Christian Calvin had spent his entire career in retail. At 43 the business sold and he started tapping into his creativity. He painted on canvases, cardboard, cereal boxes- anything he could get his hands on. He has had many early successes and attention on his art by his local community with purchases and donation requests coming in frequently. Calvin now displays his work in the Calvin Gallery located at 811 Meadowlark Lane in Goodlettsville, Tenn.

Brownie Calvin owned and operated a successful retail chain for 31 years in Nashville Tennessee. After he sold the business, he started creating his “CALBOTS”~ robots made from found objects, old parts, and metal. Brownie has re-invigorated his childhood artistic ability as a form of therapy and a way to continue the bond with his son, Christian. Father and son worked together for 30 years and continue that tradition by working side by side daily creating art.

Admission is free and donations are gratefully accepted.

Your ticket for the: BIRTH: A Father and Son Journey – Opening Reception