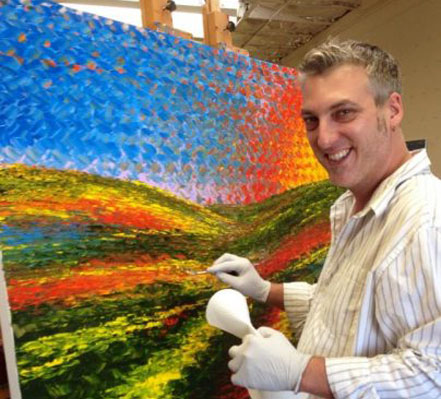 Alexandre Renoir, great-grandson of master impressionist artist Pierre Auguste Renoir, to visit Monthaven Arts and Cultural Center and share his art and personal style. The day will be filled with a myriad of activities, including art, music and refreshments, all sponsored by the Park West Foundation.The exhibition runs April 22 – June 10, 2018.

Renoir will be present at the FREE, public opening of Beauty Remains on Sunday, April 22 from 2pm to 4 pm. Approximately 40 of Renoir’s works, primarily oils on canvas, will be shown. Among those will be a painting Renoir has created specifically for the Tennessee exhibition entitled, “Moonlight and Magnolias,” which features a view of historic Monthaven, the late Victorian Greek Revival mansion, built about 1860. Posters of the commemorative painting will be available for purchase.

Prior to the opening reception, Renoir will lead a Master Class in the “Magnolia Cottage” at noon. The class is free to MACC members, but reservations are required. Non-members may participate for a $20 fee. Anyone from ages 8 to 100 may enroll by calling the MACC at (615) 822-0789. Space is extremely limited.

The title of Renoir’s exhibition, Beauty Remains, alludes to a statement that his renowned great-grandfather, who suffered from debilitating rheumatoid arthritis, made to his young friend, painter Henri Matisse, who asked why he continued to paint when it was obviously so painful: “The pain passes but the beauty remains,” Pierre-Auguste Renoir, 1915.

Alexandre Renoir says he continues to live by his great-grandfather’s painting philosophy, roundly criticized in the days of the advent of Impressionism, of preferring to portray the pleasurable, serene aspects of life, while pointing out that there were “too many unpleasant things in life as it is without creating still more of them.”

Renoir’s painting style is based in Impressionism, which was innovated and mastered by his great-grandfather, who was extraordinarily successful during his lifetime. However, Alexandre has adapted and evolved the Impressionist style by using an approach that is looser, and brighter than his celebrated ancestor’s. His work is generally inspired by nature (lilies are a theme that return again and again), while Pierre-Auguste Renoir’s paintings focused predominantly on feminine sensuality and domestic life scenes. Alexandre also paints exclusively with palette knives, many of which he makes himself based on his particular need for a work, and also mixes his oil colors directly onto his canvases, which he says produces deeply saturated, vibrant colors not seen in traditional, 19th- century Impressionism.

Visitors to Beauty Remains, which will be on view through June 10, will be able to see his great-grandfather’s (who died in 1919) influence on his descendant’s work almost 100 years later. 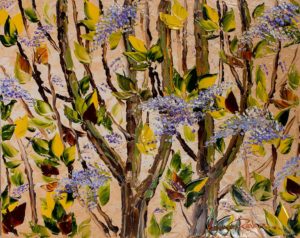 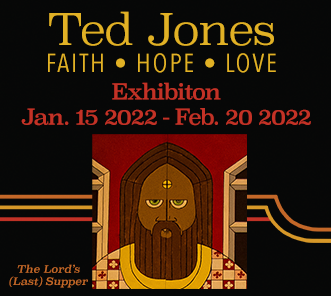 The Art of Ted Jones

Nashville artist Ted Jones is widely known as a printmaker,…

Your ticket for the: Alexandre Renoir: Beauty Remains