BETWEEN TWO WORLDS: THE ART OF JAIRO PRADO 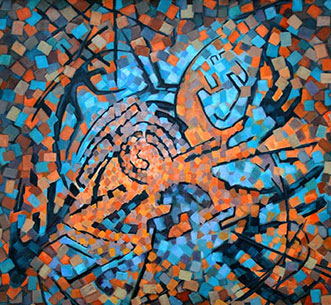 With a prolific career of more than 50 years, Jairo Prado is widely regarded as one of Middle Tennessee’s premier Latin-American contemporary artists. His significant public contributions to the cultural landscape of Nashville, especially his high-profile murals and mosaics, continue to inspire local communities. His exhibition at the MACC will be the first comprehensive survey of his work to appear at any gallery.

The exhibition’s diverse compilation of paintings, drawings, etchings, mixed-media constructions, mosaics, and sculptural works reveal a physical and internal journey described through creative exploration. The works are inspired by the art, culture, and history of Prado’s native South American home, combined with influences in contemporary 20th-century art and folk art traditions of Tennessee. The resulting work is the fusion of colliding worlds: ancient and modern, Colombian and American, urban and rural, abstract and representational, fine art and cultural craft, exploring struggle and triumph within the realms of the temporal and eternal.

The exploratory nature of Prado’s craft incorporates a variety of methods, materials and influences. His style is often characterized by a vivid color palette along with interacting shapes that provide dynamic movement within both abstract and representational compositions.

Sculptural works include wood-carved monoliths and relief constructions, mosaic, plaster and wire, along with abstract and representational paintings, drawings, watercolors and etchings that incorporate influences in cubism, surrealism, expressionism, and constructivism. Gathering works from the artist’s own collection, alongside significant works from rarely exhibited private collections, this exhibition will provide an in-depth look at the progression of his signature style.

Tuesday to Saturday from 10am to 5 pm

The exhibition is FREE and open to the public. All ages are welcome.
Donations are welcome and appreciated.

Jairo Prado was born in Cali, Colombia, South America in 1947, and studied at the National University and the Museum of Modern Art in Bogota. Amid rising social and political unrest he immigrated to the US in 1984, and after a brief time in New York City, opted for the slow-paced solitude of Nashville, TN to pursue the development of his work.

For 36 years Prado has established himself as a working artist, sculptor, muralist, mosaicist, and teacher, creating commissioned works and exhibiting regionally and nationally. Noted solo exhibitions include the Vanderbilt Divinity School Gallery, Leu Gallery at Belmont University, and the University of North Carolina at Wilmington. His work was chosen for the Biennial Best of Tennessee Craft Artists at the Hunter Museum of American Art. Prado’s work can be found in multiple public and private collections, including the Millennium Collection at the Tennessee State Museum, Nashville’s Music City Center, and First Tennessee Park.

Prado has also actively been an educator and community-based artist, frequently collaborating with local universities, organizations, and arts institutions, such as Watkins College of Art, Frist Art Museum, and Conexión Américas. His community-based work celebrates the history, culture, and creative expression of those who inhabit the city.  Often incorporating elements of community engagement and hands-on creation, Prado’s public art installations encourage cultural unity and neighborhood transformation through creative placemaking.

Prado’s most recognized work is “Migration,” an award-winning iconic architectural mosaic mural located at the gateway to Nashville’s International corridor. “Migration” has been called the crowning jewel of the façade of Nashville’s Casa Azafrán Community Center, selected for the 2014 Mosaic Arts International Exhibition hosted by the Society of American Mosaic Artists, and recognized as a “Best of the Southeast” travel destination by the Atlanta Journal-Constitution.

Register for Exhibition: BETWEEN TWO WORLDS: THE ART OF JAIRO PRADO

Your ticket for the: BETWEEN TWO WORLDS: THE ART OF JAIRO PRADO

BETWEEN TWO WORLDS: THE ART OF JAIRO PRADO