From helicopters to watercolors and canvas VIETNAM: 2 SOLDIERS, 2 ARTISTS, 2 JOURNEYS THEN AND NOW is the story of two brave soldiers who battled their way into the world of art. Trading the tools of war for the tools of the trade.

Their long journey from the 1960s to the present was illuminated by their shining talent and brilliant ability to see the world from a different perspective. One forged by unique life experiences as young men that were to sharpen their focus, and prepare them for a career in the world of art; one of the most evocative expressions of freedom.

Whether it’s David Wright and his historically-researched paintings of classic American history or Chuck Creasy’s watercolor works of subjects from the jungles of Honduras to the hidden backroads of rural Tennessee, your senses are in for a treat.

This memorable, one-of-a-kind exhibit features highlights of both the artist’s best work from Vietnam. David, from sketches and drawings done in-country during his deployment. And Chuck, from a much-anticipated trip back to Nam, fifty years older and a lifetime wiser.

It all comes together in this exhilarating and meaningful show, one that bridges two lives, two worlds, two journeys. Join us in this celebration of these two talented men who returned from war to pick up their lives and continue their journey for the ultimate symbol of peace…art. 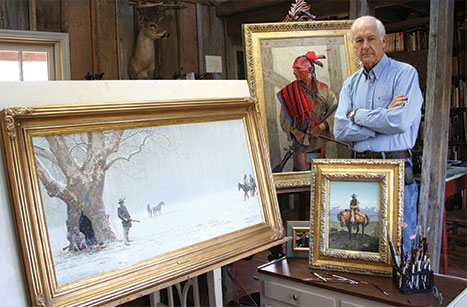 Born in Rosine, Kentucky in 1942 and raised in Goodlettsville, Tennessee, David Wright has always had a close association with the two major subjects of his work; the rural landscape and American history.

Professionally trained as an artist, with study in Europe, Wright has spent his life painting subjects he is most passionate about… historical subjects: the American frontier – the hunters, settlers, soldiers, American Indians, and the Civil War.

In 1964-65 his career took a two-year break to serve in the United States Army. Stationed in Fort Gordon, Georgia in 1964, Wright volunteered for duty in Vietnam and in December was sent for a year-long tour of duty as an advisor with MACV (Military Assistance Command Vietnam). During his year in-country, he traveled from the 1st Corps in the north to the Mekong Delta in the south. While in the highlands, Wright served with the Montagnards, an indigenous people, and was adopted into the tribe. He also flew as a volunteer helicopter door gunner on gunships with the 197th Aviation Company.

While in Vietnam, he managed to do a number of drawings and a few paintings of the Vietnamese people, soldiers, and landscapes based on his experiences. After his return home, he continued to record his year-long involvement in art from photos he made during his tour.

Upon discharge from the Army in December of 1965, Wright re-entered the art field as a commercial artist. In 1973 he joined Gray Stone Press, which publishes limited-edition collector prints of his American history paintings. In 1978 he phased out his commercial ventures and has since focused on painting full time. In addition to being actively sought by collectors,
Wright’s paintings have been featured in television documentaries and as covers for numerous books and magazines.

Venturing into the media world, Wright has appeared on television as an historical consultant. He has also served as Art Director for Native Sun Productions high definition films: award-winning Daniel Boone and the Westward Movement for Cumberland Gap National Historical Park, Virginia State Parks Refuge in the Wilderness, and the History Channel’s 80 Acres of Hell and First Invasion – The War of 1812 for which he was nominated for a Prime Time Emmy for Art Direction. Wright was commissioned to do a signature painting for Cumberland Gap National Historical Park entitled Gateway to the West – Daniel Boone Leading The Settlers Through The Cumberland Gap, 1775. This painting has been made into a breathtaking wall-size mural and is on display at the Cumberland Gap Visitors Center. He was awarded the prestigious Harrison Eiteljorg Purchase Award at the Eiteljorg Museum Quest For The West Show for his painting titled Uninvited Visitors which now is included in the museum’s permanent collection. 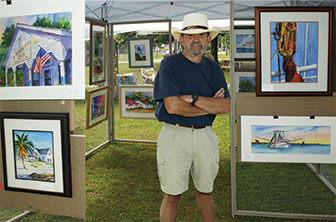 Born in Westmoreland, TN in 1946 and raised in East Nashville, Chuck grew up in the shadow of the music scene, but instead of pursuing music he was consumed with art. So he took private lessons starting at nine years old, winning numerous art awards that fueled his passion. Pursuing his dream, Creasy enrolled at Tennessee Tech in Cookeville where he met and married Marnie Davis. During that time, he was drafted into the Army just as Vietnam was raging in Southeast Asia.

After Basic and AIT Chuck was chosen for Officer’s Candidate School at Ft. Sill, OK and was graduated as a new 2nd lieutenant. 1 year later he received orders for Vietnam.

During Creasy’s tour of duty in Vietnam, he served as an artillery forward observer. He was assigned to B Battery, 3rd Battalion, 82nd Artillery and attached to Bravo Company of the 196th Light Infantry Brigade. His job as forward observer was to move with Bravo Company on search and destroy missions that would seek out the VC and NVA to neutralize them. The unit was humping the boonies at least three weeks a month, living on the ground, digging in each night and sleeping in the bush. It was a nasty assignment, especially considering the life expectancy of a forward observer attached to an infantry company was a mere two and a half weeks. But Chuck made it with minor problems; malaria, dysentery, and jungle rot until he broke his foot and was sent home early. Several months later he received an early release and enrolled in art school instead of going back to college so he could finally pursue his love for art. In retrospect, a wise move indeed. During those summers, he also met and spent time with Norman Rockwell in his studio in Stockbridge, Mass.

After art school, Chuck was hired as a cub artist and junior art director in one of Nashville’s newest and hottest c advertising agencies, Eric Ericson &
Associates. This would be the beginning of a 48-year career as an advertising creative. During that time Creasy had the good fortune to art direct, design and creative direct work for iconic clients across America including Jack Daniel’s Distillery, Opryland, The Grand Ole Opry, and the Boy Scouts of America to name a few. Winning roomfuls of prestigious awards, highlighted by five “Lions” from the Cannes International Film Festival.

But it has always been his fine art that attracted Chuck like a magnet as he used his free time to perfect his work, in watercolors. From the pristine Bay Islands of Honduras to the hidden back-roads of rural Tennessee, Chuck’s subject matter reflects the road map of his career travels as well as an adman’s insatiable curiosity about how things work in real life–the mystery of a forgotten dugout canoe that once served as a means of making a living for a family on the island of Guanaja, the way late-afternoon light wraps around a weathered lighthouse on the Aruba coast.

But something else always attracted Chuck like a magnet. The provocative, mysterious, and exotic far-away land of Vietnam. It’s haunting memories, both good and bad, reverberated through his mind and perhaps his soul. It was with this backdrop that in 2018 Chuck returned to Vietnam. Exactly 50 years since he was last there. To explore. To contemplate. To compare the past with the present which, like his vivid paintings, offered not only contrast but also a rich tapestry of textures. What resulted is a treasure trove of paintings that capture a revitalized country once torn apart by war.

It is in this show that you’ll see many of these paintings and feel their emotional impact which will light up your senses and fuel your imagination. Yes, Chuck has finally realized his dream of becoming an artist. A fine artist.

Chuck and his wife Marnie now reside in Hendersonville, TN

Your ticket for the: VIETNAM: 2 SOLDIERS, 2 ARTISTS, 2 JOURNEYS THEN & NOW