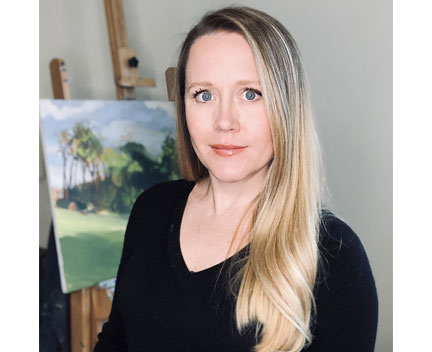 Jessica Lewis has been a professional artist for over 20 years with a focus on oil painting. She is especially known for her enchanting portraits of children and out-of-the-box thinking when approaching art. From commissioned portraits to plein air landscapes to largescale mural installations, her work is thoughtful while inspiring and delighting.

During High School, Jessica was accepted into the Governor’s School for the Arts for the state of Kentucky. She was later honored as the solo recipient of the Kenady Lynne Hendershot Memorial Scholarship—an award given annually to one student for a fully paid, four-year degree program. The fifth-year of her BFA (Bachelor of Fine Arts) program was covered by the Hite scholarship, an endowment fund for the arts at the University of Louisville. Jessica continued her studies at Southern Illinois University, completing an MFA (Master of Fine Arts) with a concentration in painting. She has had the opportunity during her career to teach art from the beginning stages to collegiate-level coursework.

After college, she spent 8 years in the entertainment industry as an artist and sculptor with an architectural firm creating large-scale themed environments for children and families. Her work can be seen in numerous museums, zoos, resorts, water, and amusement parks across the country.

Shortly after moving to Nashville, Jessica began working as a commissioned portrait painter. As her family grew, she became increasingly interested in capturing the wonder of childhood. The memories from her own past as well as the experiences with her kids, provide the backbone for her ideas. She pulls from both, creating one-of-a-kind paintings that are designed to invoke conversations around the differences between the generations. There are many moments throughout childhood that are universally understood—it’s one of the rare things that binds us all and what Jessica seeks to portray.

She has exhibited in numerous venues and has received a multitude of awards. In 2018 she was awarded 2nd place in the Portrait Society of America’s, Out of The Box category. Most recently, in 2020, she was awarded 10th place in the Commissioned Portrait category in the Portrait Society of America. She was also honored in 2020 to be selected for the Red Clay Survey, an exhibition showcasing the best in southern contemporary artists exhibited in the Huntsville Museum of Art.

A Nashville resident for 14 years, she recently moved to Goodlettsville and spends her time doing commissioned portraits, plein air painting as well as teaching. She is also a member of the Chestnut Group, a plein air painting group dedicated to the conservation and preservation of vanishing landscapes and historic buildings in middle Tennessee.

Your ticket for the: Jessica Lewis